What Have In Common Solvents And Eternit? 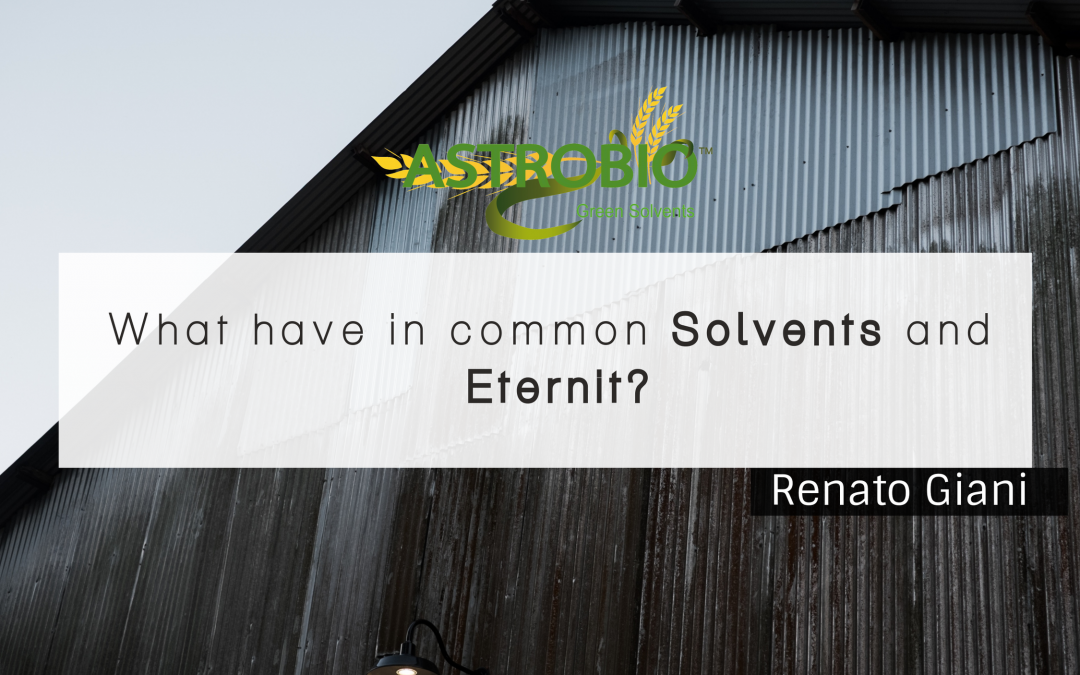 Many times, when we hear or read about renewability and sustainability, we are thinking what do they matter with our daily life and activity.

Normally we reply : they don’t matter at all !

On the contrary, if you consider how many products have changed in our present activities, in comparison with those used by our grandparents, let think about how many of them have been recognized as dangerous or even carcinogenic!

It must be considered that once upon a time all things were really different.

Just an alternative : using what it was available or not working at all !

In most cases, the great part of toxicity aspects and consequences on human health weren’t known at all, neither labels nor protection devices were available.

Unfortunately, all consequences have been recognized after many and many years.

An awful and widespread example is Eternit.

It has been invented in 1901 and during the time it has grown a lot and accepted as a standard material for covering and roofs, drinking water pipings, etc..

It took almost 60 years to fully recognize its inherent dangerousness and further 25 years to completely stop its production!

Answers may be several, but the simplest one is the following :

persons do their best to resist the changes, even though danger is in front of them, and don’t want to act until when they are forced doing it from the law.

The same thing is valid for solvents.

Since years, safer alternatives to some petrochemical solvents are available on the market, but very often industrial users and consumers:

What are these so called biosolvents ?

They are a family of solvents of natural sourcing, deriving from the fermentation of carbohydrates contained in vegetables ( i.e. sugars and starches ) and from further natural feedstocks.

They have been studied and developed on purpose in order to replace traditional, commodity solvents you are using every day.

Biosolvents are already used all around the world by a great number of companies, well known for their innovative attitude and peculiar attention to the health and safety of workers, users and environment.

Fields, where biosolvents are going to replace more and more traditional ones, are a lot, for example in the production of solvent-borne coatings, i.e. paints, varnishes, lacquers, inks, adhesives, sealants, paint strippers and many more.

They are assuring 4 advantages :

Accordingly to recent research ( Research Inc., 2016 ) by 2020 worldwide biosolvents’ market will be worth over than 3,6 million metric tons.

Since 2000 I’ve been working in industrial biotechnology and for more than 10 years I’ve been involved in research and development of innovative solvents of vegetal origin.

At Eurocoat 2016, held in Paris, I’ve held a short lecture on our biosolvents and our stand has registered great attention on our products by plenty of visitors.

You can find this full video in the section “ resources “ of our blog.

I have to be honest with you : biosolvents aren’t for all people.

Notwithstanding their several advantages, if you consider them just on the price level, nowadays they are still the most expensive solution.

Furthermore, nobody forces you to get rid of acetone or white spirit or aromatics, even though their inherent risks are well known to everybody!

But, if you too are an innovator and aren’t afraid about changes, thinking it’s really possible now to replace old solvents, by testing available alternatives, please, send us your comments to this post or write me, filling here enclosed format.

I’ll be eager to answer you.